Australia's finest was playing the "Toast Australia" festival at Olmypia. The fetival was basically a trade show for promoting Oz, but with a lot of Wines and Beers available - albeit at high prices. £3.50 for a bottle of beer is a bit steep when you've already paid >£30 to get into the place!

We missed the first support act - one of Jimmy's daughters, but were in for the next - Brooke Supple. She played some pleasant tunes and was at one stage subjected to the type of heckling you'd only get when drunken Aussies are present 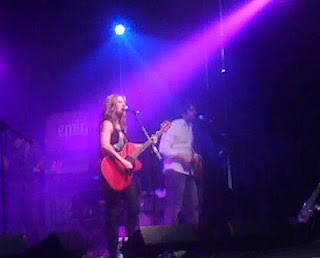 We then queued up to meet Jimmy and get his authograph. What a nice chap he is too - happily posing for pictures and signing tickets and CDs. Richard's photo of me was awful beyond belief, but never mind.

Onto the show where it had become apparent that we were amongst the less than 1% of the crowd who weren't Austrialian. About the same percentage (1%) weren't slaughtered! Anyway, a great setlist and singalong - no hint of trouble and great fun had by all. Come back soon Jimmy!
Posted by MatthewB2 at 1:43 pm No comments:

An intended mini pub crawl through the strees of Barnet actually turned into quite a session. This included some suprisingly high standard darts on one of the pubs en route - can't go wrong when the pub provides 2 Tournament boards and a proper raised oche ! Despite playing really well (123 on one throw and a 100+ checkout), Richard somehow won 3-2 !!

Maybe due to the beer, I was suprised when we got to the venue, because it wasn't where I expected. Or rather it was, but it was a different venue to the last time we went to Totteridge & Whetstone. Very confused!

Anyway - the band were the Mods who we normally see in Sutton - that is Johnny Warman, Steve Byrd, Steve Barnacle, Johhny Marter et al. The expected evening of classic Small Faces, Kinks etc and the bonus of even more Who tracks than normal. Excellent stuff, aided and abetted by unusually attractive bar staff!

All followed by a long snooze on the Northern Line!
Posted by MatthewB2 at 1:38 pm No comments: