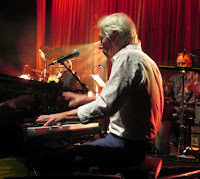 Back for more Quo? Why? Well one, I know it'll be good and two, there were some amazingly good tickets came online well after the front blocks had sold out.

We'd always wondered what it would be like to be in the 2 seats at the front row of the stalls, next to the stage. Well the answer is that you are effectively on the stage and almost feel part of the band. And for an acoustic show like this there are no sound issues either.

You won't be surprised to know that the setlist was the same as on Sunday, but the band seemed quite relaxed - I think they are getting used to playing the material in this way.

My personal highlights in this format are Rock 'n' Roll, All The Reasons, Reason For Livin' and the brilliant Nanana. 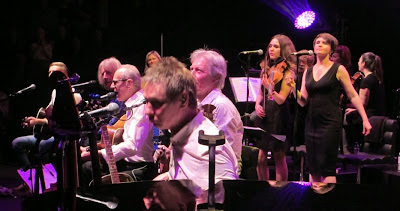 Whilst enjoying the debut "Aquostic" gig at the Roundhouse last year, I wasn't certain I could justify the high price for seats this time around. That little issue was solved by the availability of rear-stalls standing tickets at a much fairer price, so we opted for those. I remember doing the same for Chuck Berry tickets years ago and (depending on the gig and security attitude), you are sometimes allowed to stand at the side of the venue rather than really at the back. That's what we did here.

The show was good, but in typical Quo style, they made zero changes to the setlist. Yep, all the same songs, in the same order as last year. Now that I could understand if it hadn't been for the fact that the new record is a recording of that show - the same songs in the same order. C'mon guys, throw us a curve ball - swap 2 songs over! Would it have been too much to ask that they learn another song?

Still - there's probably only a fraction of us that moan about such things. The sound was good, the songs were good and I really enjoyed the evening. Just as well, as I'm going again next week!

A sort of "hometown" gig for the Quireboys (well, Griff anyway!) at Esquires in Bedford. Now that's actually a fair trek from south of London, but as we missed out on seeing the boys at the end of last year due to a clash of dates, it seemed a worthwhile jaunt to see them in a tiny venue.

The handful of pubs nearby seemed functional and very quiet (some were suffering from a power cut). In the Ship, I managed to win the pool 3-2 on the final black. I was also quite pleased to find a chippy open on a Sunday.

The venue itself had 2 rooms - a nice bar and small stage in one and the "Holy Moly" room where the boys were playing. Social media from the boys had promised a prompt 8:30 start - predictably this slipped to 8:45. Spike appeared to be particularly "refreshed" after a spending time with Phil Mogg apparently the night before. The show was acoustic again - no drummer or bass - and the songs strangely missed nearly all the material from their new album. That meant we knew most of them and an enthusiastic sing-a-long was had by all. The late start meant we had to leave before the encore, but catching the fast train meant being home at a civilised hour at least.

Nice to see rock and roll being kept alive in Bedford! Yee-ha!