Another evening of Rod Stewart hits, courtesy of Jim Cregan and his band. A strange mix of old rockers and young ladies here to ogle at vocalist Ben Mills  makes for interesting a people watching at their shows, but the musicianship and songs means that it's the performance that always commands attention. A busier than expected hall was uncomfortably hot at times, but the 2 set show sent everyone on their way happy.

Thunder's Harry James was on drums - a bit strange seeing him again so close to the Wolverhampton Christmas shows.

Breakfast in the hotel and pretty much all of the guests seemed to be kitted out in Thunder T shirts. Those I spoke with had all enjoyed the night before and most were disappointed not to be repeating the experience later.

Rich was getting the train up from London and we met in Birmingham for a beer and to take in the delights of WBA v Hull City at The Hawthorns. This led to something that has rarely happened in 35+ years of watching top flight football when the match ball came straight to me in the 2nd minute. I'd like to report a clean overhead catch, but in reality it was more a parry sideways onto the head of the people next to me.

We tried to have a quick pint in Bilston afterwards at "The Trumpet" (famous to fans of Slade) but sadly it was closed until later that evening. I will have to return some other time.

So, onto night 2 and more of the same. Slightly different order to part of the 2nd half and a dropped song, but if anything slightly better than last night - perhaps due to being fractionally less busy.

A nice nightcap followed in one of Wolverhampton's rock pubs.

A trip to the Midlands for night one of two at the Thunder Xmas Parties. On my own for the first - the venue was heaving by the time I got there 10 mins before show time. I had to spend the acoustic set at the back before moving forward for the second half. A solid mix of favourites, rarities and covers with lots of audience participation, especially during an excellent "Do You Wanna Know (Just Another Suicide)"

Got soaked on the way back to the hotel! 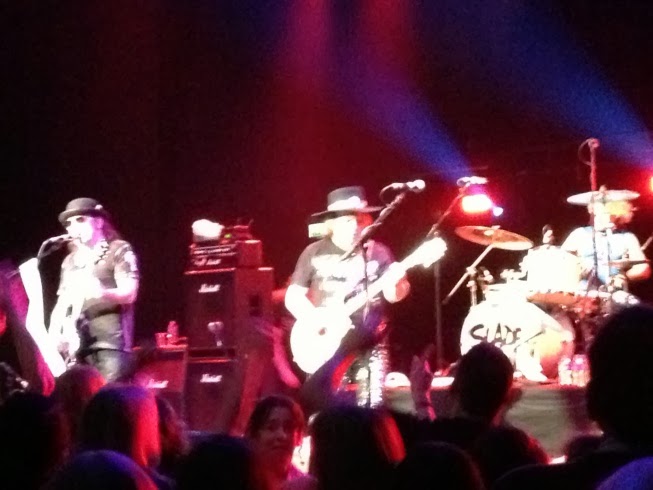 A repeat of last year's double bill.  A near identical set from Sweet too, but none the worse for it as it was mainly hits based. The guys appeared at the interval to sign stuff which us always a nice touch.

Slade were good too, albeit a little brief. Apparently the singer Mal is looking to leave, but I thought this was his best performance in all the times I gave seen them. All in all, good fun. 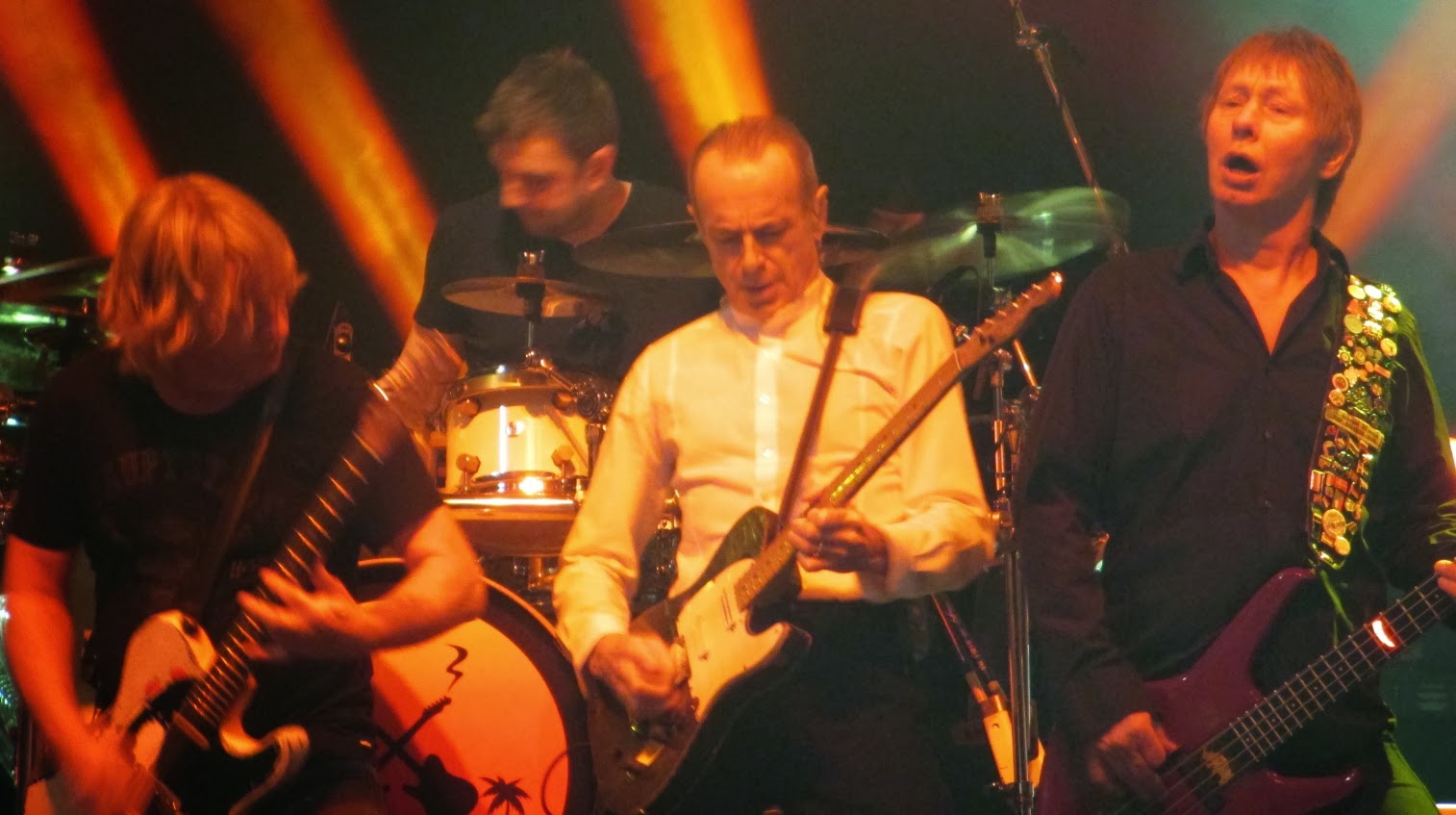 The regular winter jaunt to the south coast for a bit of "current Quo". Support came from 10cc who I was distinctly underwhelmed with. They have some decent songs (I'm Not in Love, Rubber Bullets, Things We Do For Love, Dreadlock Holiday) and are decent musicians to a man, but beyond those 4 songs, didn't do it for me. A shame, as I'd been hoping for much more from a band with a supposedly renowned back catalogue.

Quo were on good form - Francis Rossi often seems to up his game at Brighton and tonight was not exception - some good solos and amusing banter with the crowd. All over in time for us to make the last train without missing anything too! 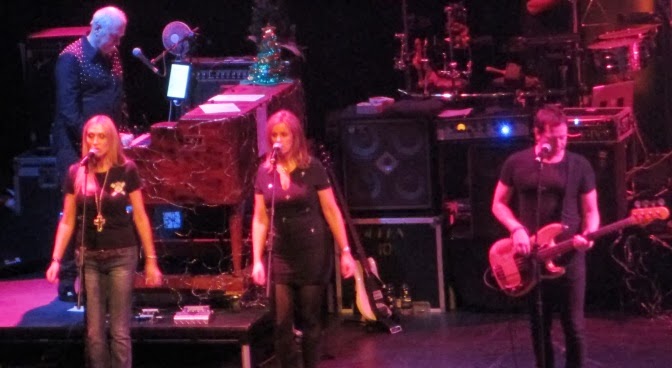 A sold out show at G-Live. The announcement of 2 support acts had me fearing again for the accuracy of the stage times and the viability of our last train home from the nearby London Road station. The first act - 'The Opera Duo' did a decent version of Barcelona and 'Nessun Dorma' in their brief 3 song set. They were followed by 'Woman' - whose unique brand of vocals and strings provided an unusual take on a range of covers from Sweet Child O'Mine through Black Betty to Fat Bottomed Girls. They were well received.

Spike Edney and his SAS band appeared and rattled through a few favourites from their covers repartoire with Jamie Moses and regular guests Patti Russo and Madeline Bell joining in. A highlight was the appearance of Midge Ure for Dancing with Tears in My Eyes, Vienna and a rousing Delilah!

The 29 Riffs song then got an outing and sounded as good as ever. Next up was the return of Roger Taylor's 'Cross' for the first time in 20 years. Many of the crowd had travelled long distances to witness this historic occasion. Now I'm a big fan of Mr Taylor and own pretty much all of his solo output as well as the full Queen catalogue. Some of his material outside of Queen is fantastic - unfortunately, IMHO, very little of that was recorded with The Cross! I was left underwhelmed - especially as he left the stage for a few of the weaker numbers and dragged out others.

The folly of a double support act meant we had to forego the Christmas sing-a-long at the end. Although a good evening, I couldn't help but think this was the weakest of all the SAS shows I have been to over the years with a noticeable lack of the usual roller coaster of surprise appearances. Maybe we've just been too spoiled in the past.

THE CROSS
In Charge of My Heart
Top of the World, Ma
New Dark Ages
Man On Fire
Ain't Put Nothin Down
Liar
Dirty Mind
Cowboys And Indians
Power to Love
Heaven For Everyone
Sister Blue
Final Destination
+
Happy Xmas (War Is Over)

Disaster! We found the venue this time, but the CD was sold out (bloke in front of me got the last one - grrrr!) I consoled myself with a DVD which Dan kindly signed later. Much emptier than last night and a support band too, meaning a shorter set from the headliners, which was a shame.  They mixed the set up a bit and a few songs were quite a bit shorter - indeed neither of us could recall the last time we heard 'Sheila' played without snippets from other songs in the middle. Still, another good show - hopefully more of the same for 2014?