First gig for a while that we've been unable to get to (and more importantly, home from) by public transport. The show - in a bizarre trading estate venue - was in aid of the local horse sanctuary and also featured the Deborah Bonham band. We caught part of her set which was good - a raucous version of Led Zep's "Rock And Roll" bringing things to a close.

After an auction which went on a bit longer that expected. Mr Rodgers arrived in a fine yellow shirt. Borrowing Deborah Bonham's band, I was amazed by the 100% Free setlist that followed which included songs apparently not played for several years if not decades. The band were fantastic (especially lead guitar), vocals as good as ever and this truly was a night to remember. See you next year?

Setlist
Wishing Well
The Stealer
Ride on a Pony
Be My Friend
Songs of Yesterday
Fire and Water
Mr. Big
Remember
I'm a Mover
Woman
Oh I Wept
My Brother Jake
Little Bit of Love
+
Walk In My Shadow
The Hunter
+
All Right Now
Posted by MatthewB2 at 1:07 pm No comments:

This was the rescheduled gig from the abandoned one a few weeks ago. The venue was noticably less full than it was then - the pending Easter break may have had something to do with that.

Peter Shoulder appeared to have fully recovered and his vocals were top notch - as was the playing from the rest of the band. I couldn't put my finger on why, but this felt slightly flatter than other performances by this excellent band. That's not to say it wasn't good - I'd just give an 8/10 instead of their normal 9+.

Setlist
Step Up To The Plate
You're my Jesus
Tangled Up In You
Cut The Line
The Perfect Crime
The World Is Yours
Obsession
Saviour
Tonight I'm Alive
Black Monday
Fading Out Of Love
Black Gold
Siren's Song
+
Come Rain, Come Shine
Watch The River Flow
Posted by MatthewB2 at 12:57 pm No comments:

More of the same (without the pre-show trribute band) - this time we were nearer to the front. Great atmosphere again. Same set as last night (no surprise there). Being at the front, it was apparent that Alan Lancaster looked a little frailer than I'd previously noticed. He was also having great difficulty holding on to the plectrum he uses to pluck his bass - by my reckoning he must have dropped it at least a dozen times. As the roadie usually had to come on to pick it up, I wondered why they didn't simply have a strip of replacements on his mic stand? I hope this wasn't a sign of Alan's much talked about illness and that he comes through this run of shows in good health. 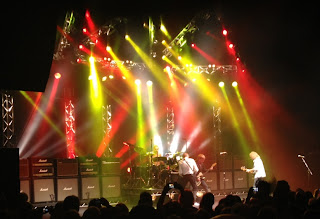 A tour 32 years in the making - the (temporary) return of the "classic" Frantic Four lineup of Status Quo. Having first seen Quo in 1984, I had never actually seen the incarnation of Rossi, Parfitt, Lancaster and Coghlan, so it was with much anticipation (and a little intrepidation that it might not be as good as we all hoped) that an afternoon was booked of and we trecked off to Hammersmith.

The Distillers pub in Hammersmith were hosting tribute band "Stated Quo" and they entertained a packed house with a racous collection of familiar and more obscure Quo tunes.

After a few pints, it was off to the main venue to get a decent spot. We settled for a good view about 1/3 of the way back, left of centre. The pre-show atmosphere was electric - the kind I've only experience a couple of times in nearly 30 yrs of gig going. An almighty roar greated the lights going down and an edited version of Jackie Lynton's classic introduction from 1977 played on the PA. "Is there anybody out there that wants to rock....?"...

Starting off with Junior's Wailing, Lancaster took vocals on the first 3 songs. The set flew by with an intensity that belied the combined ages of the 4 musicans on stage (circa 250). Rossi was on fine form - solos were brilliantly played and he seemed to be enjoying himself. Also noticable was the lack of messing around / changing words etc - maybe because all the show were being recorded? Who knows, but it was good to see a serious "no messing" performance.

An hour and a half later we were all done with the last few "Bye Bye's" of Bye Bye Johnny. On the way out we agreed how fantastic it had been. A one off tour? Let's hope not!