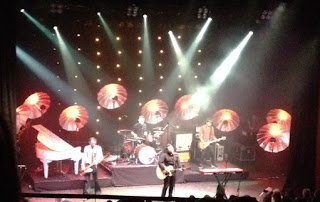 The full tour show from Scouting For Girls and we have seated tickets in the 1st tier at the Shepherds Bush Empire. Decent view, but had to get here early to secure unreserved seat. A decent set from the boys, including a nice cover of Bon Jovi's "Livin' On A Prayer". Ray's voice seemed a fraction more strained than normal, but not to any detriment.

A few new songs (some played at Kingston a month or so back) fitted in well with the old favourites and the crowd was in good voice throughout, but especially during 1+1.

I really like these guys as a band, but I do have one (albeit minor) criticism. It all feels a bit rushed - almost as if they daren't leave any time between songs and feel the need to fill any potential lull in the crowd volume. If they just slowed down a bit between songs when they changed instruments, spoke to the crowd (as they do really well) and introduced stuff in a slightly less manic way then it would make the show 5 minutes longer (no bad thing as their shows are quite short) and just make the whole thing look more polished.

[Follow up: Shepherds Bush Empire now closed for the "rest of the year" for urgent repairs! - details here ]

This years London Snakecharmer show was still in Islington - this time at the O2 Academy - which is becoming one of my favourite venues. We swapped from our normal bar-side to stand in front of Micky Moody as the sparse crowd made access throughout the floor very easy. It's a shame it was so quiet - especially for a Friday - maybe the fact the band are still trading on their only LP is a factor? Still, they contain 2 of my favourite drummers and bassists (Harry James and Neil Murray) and the set selection of Whitesnake numbers and self-titled LP highlights was solid, albeit a little short maybe.

So all good, but I'm not quite sure what the bands strategy is to move themselves forward to bigger and better things. The answer might be that they don't need one and are happy doing what they do. 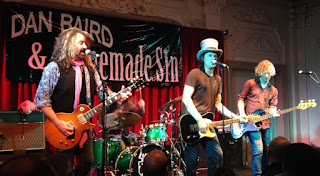 My second of the-end-of-year Homemade Sin shows - back at the Bush Hall which it has to be said was considerably less busy than last years equivalent show. It was what you'd expect though - loud, sweaty and good.

Shame the bar isn't up to much - overpriced bottles only (of Meantime) - but we're not here for the drink, it's the music that was key. Different setlist from Winchester (again sadly not recorded by me) and my ears were ringing afterwards. I purchased the new CD and Vinyl on the way out which Dan was kind enough to sign for me. Must have a look through his solo stuff that I own - I probably now have more signed than not!