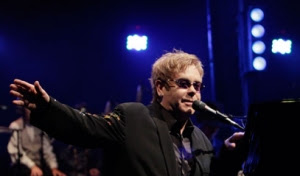 There are pros and cons to the BBC Electric Proms shows. The obvious pros are to see superstar artists in a relative intimate venue and an affordable price. The cons are getting the tickets (although I've been quite lucky there) and the phaff of having to go and collect a wristband earlier in the day and then turn up for the show later (at least that does hinder the touting trade a bit). There's also the fact that the artists are encouraged to branch out and do something different from their normal show - that's sometimes good and sometimes bad.
In this case Elton started with a selection of lesser played hits in which "Burn Down The Mission" and "Tiny Dancer" were highlights. Special guest was Leon Russell (who was on much better form - make that sound quality - than a few months ago) and he played a few solo numbers before Elton mentioned the dreaded words "He's the hard part for the audience - the new album in it's entirety". Now to be fair, the album isn't bad - but 3-4 highlights was surely the way to go!

Alongside, we got 2 other guests:- "Plan B" to duet on "I Guess That's Why They Call It The Blues" - and absolutely murdered it. I can't recall seeing live a worse vocal performance for years - and I'm including Johnny Burrell in that! Much more pleasant was "Rumer" duetting with Leon.

Best bit of the night for me was a stunning "Your Song" from Elton. A song we've all heard hundreds of times, but it was transfixing. So a mixed bag all in all - have to say, I very much agree with the sentiments echoed at this link:-
http://www.telegraph.co.uk/culture/8096296/Elton-John-BBC-Electric-Proms-review.html

and this has some fair comments too:-
http://www.guardian.co.uk/music/2010/oct/29/elton-john-review 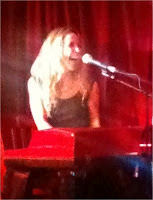 Now, I was really looking forward to this. A tiny venue for a star of Ms Crow’s nature – and her first return to the Borderline since her 1994 UK debut. After the annoyance of no physical ticket delivery, we turned up early to “collect” a handstamp to get us in. We got a good central spot about 3 yds from the stage and the venue filled quickly as the Roadies appeared to re-tune every guitar 3 or 4 times. Just after 8:30 it was showtime.

Now I haven’t purchased Sheryl’s latest CD – 100 Miles from Memphis and on this showing it’s going to have to be in the cheap end of the bargain bins before I do. Song after song of endless Jazz/Funk solos. One or two would be fine, but did each song really have to last twice as long as it needed too? The occasional hit or oldie was thrown in, but these seemed understated in the main. I have no problem with an artist wishing to showcase their new material or using the talents of their band (all of whom could certainly perform), but as Richard said on the way out – how “p****d off would we have been if we’d spent 45 quid to sit at the back of Wembley / Hammersmith / wherever and listen to that”. It was a fair observation. Sheryl herself came across well and seemed to enjoy it – but a quick look around saw several bored looking faces. Only saved by the venue and our closeness to the stage it was not a patch on previous times I’ve seen her.

Setlist
Our Love is Fading
A Change Would Do You Good
Eye to Eye
100 Miles From Memphis
Can't Cry Anymore
Summer Day
My Favorite Mistake
Sign Your Name
Improvised Guitar (Doyle Bramhall)
Long Road
Everyday Is A Winding Road
Roses
All I Wanna Do (with Mike Rowe)
Peaceful
+
I Shall Believe
Posted by MatthewB2 at 12:57 pm No comments: 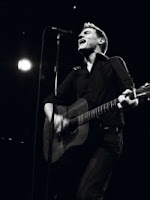 So, acoustic shows are in, aren’t they! The Bare Bones tour continues to avoid , so up to with Mrs B for Bry. Nice venue – surprisingly strict security (4 ejections and a camera paranoia!), but an enjoyable show. Highlights for me were Jealousy (first time heard live for me!), Lonely Nights, a “proper” Summer of ’69, Not Romeo Not Juliet and The Right Place. An engaging evening all round.

[Generic picture from www.bryanadams.com]
Posted by MatthewB2 at 12:56 pm No comments: 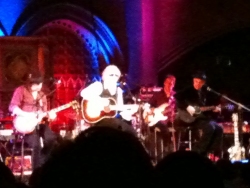 New venue for me (save for the failed gatecrashing attempt a while back!). The Church that is the Union Chapel hosted an acoustic evening (although in reality it was only partially acoustic) from the Mott The Hopple frontman with a small orchestra for some parts. It was OK, but the first hour or so dragged a bit. Ian again played a fair amount of newish and lesser known songs – not a problem, but the mix wasn’t quite right for me. It didn't help that the quality of sound was pretty awful too (a complaint I heard serveral others making on the way out) and when he spoke between songs I couldn't make out what was said.

An emotional Michael Picasso and predictable All The Way From Memphis / All The Young Dudes rounded things off and we had the bonus of another “Ross Halfin” spot! He scores 5 points whereas regulars like Dave Ling are probably a 1 point spot!
Posted by MatthewB2 at 12:55 pm No comments:

Having really enjoyed the last convention a few years ago at Bush Hall, I was looking forward to this. As it turned out, it was OK, but not especially enthralling. We got to see Thunderclap Newman (Mr Newman himself appears… errrr… slightly eccentric!) with Josh Townshend (Simon’s son, Pete’s Nephew) on guitar. We then went “down the front” for the Wholigans who were good (although not quite as good as previously), but we left before the end as we were fearing of the tube strike making things difficult. Maybe it was because I was tired after the night before, but I couldn’t get too excited about the whole thing which was unfortunately sparsely attended. Shame there were no members of the Who making a surprise appearance this time around.
Posted by MatthewB2 at 12:54 pm No comments:

This had to be the wettest day of the year!! Torrential showers (and no Victoria Line) meant I was drenched by the time I met Richard in the Hen & Chickens for a pint of Paulaner. The heavy rain continued and that stopped us from roaming too far before going to the venue.

The venue was half to two-thirds full which enabled us to get a nice spot about 7-8yds from the stage. The moment we got in I spotted journalist Dave Ling (he seems to be at most gigs I go to !!) and Quireboys guitarist Paul Guerin who I assume was with his son. Also spotted Cheam resident and rock photographer extraordinaire, Ross Halfin a bit later.

Whilst the Unions’ set hasn’t changed much over the last year (not surprising as they only have one album!), they are definitely getting better and better and the songs sound good after more plays. I especially enjoyed Black Monday, This Time Next Year and Easy Street. My early reservations are easing, although if I had one (minor) complaint it is that singer Peter Shoulder’s style slightly over-emphasises on elongating the words at the end of each line. After the normal finish of Proud Mary, we headed outside. Unbelievably the rain was even heavier. We ran 10 yds to the bus stop, sheltered under a shop cover and got the bus to Angel. By the time I got home (a 3 minute walk from the bus stop at the other end!) I was literally soaked to the skin!
Posted by MatthewB2 at 12:53 pm No comments: